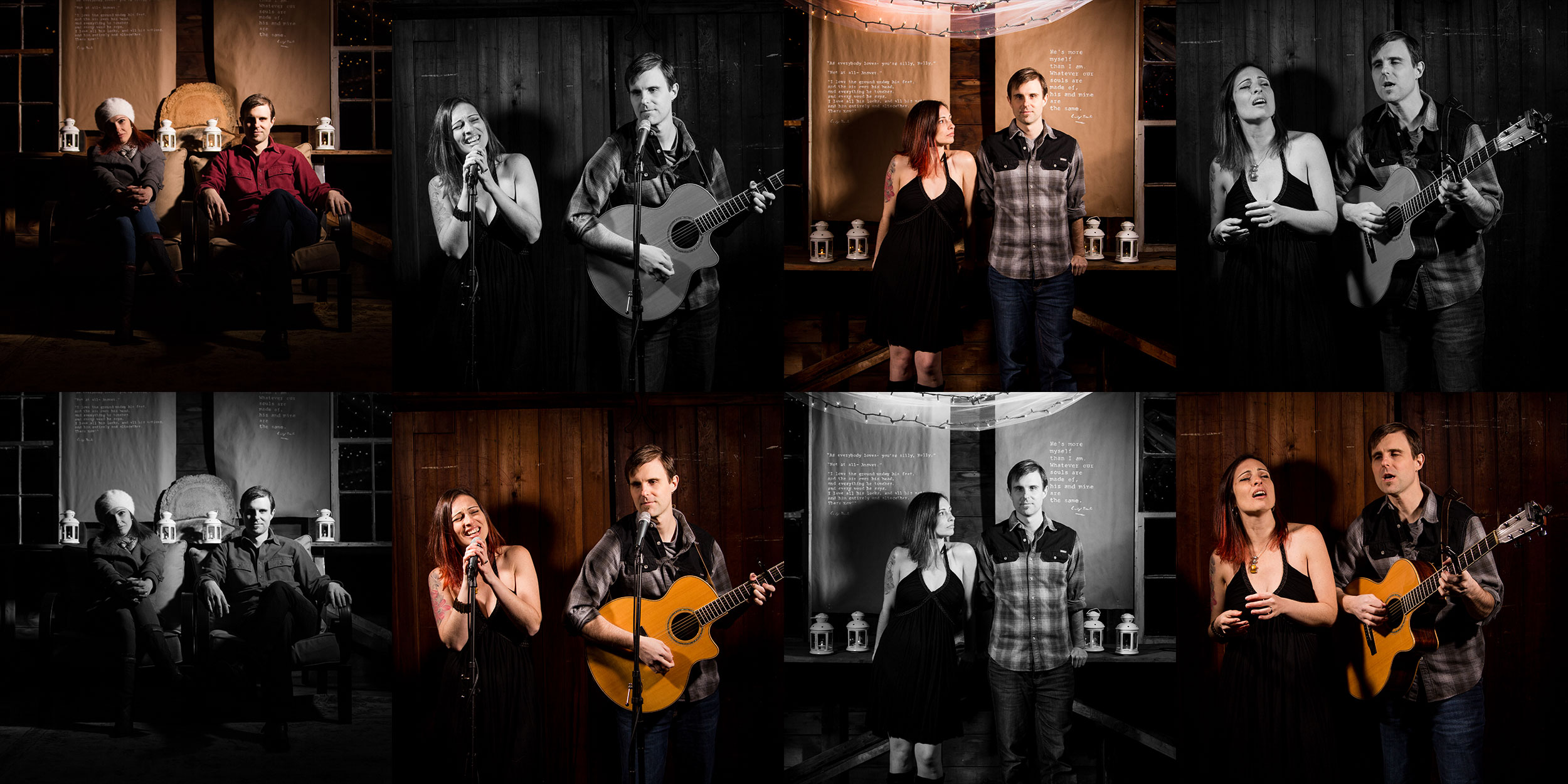 I’m not sure what to call it, but my working title is New Media Concept Album…

And I don’t think it’s ever been done before, at least not quite like this. North To Port began as an idea that came to me as my wife Barbara and I were driving around northern New Hampshire. We took a few-day vacation to celebrate Barbara’s birthday, and we spent it in Littleton, a beautiful town within eye shot of the White Mountains, and an hour drive from the Canadian border.

On our first full day we continued driving North. Though I’ve been to Canada, I’ve never been up through Pittsburg, NH and I was looking forward to seeing the woods and water that populate that area. We both like to drive and chat. I had been thinking about talking to Barbara about a project I wanted her to participate in, and this seemed like a good time to bring it up.

I wanted more music in my life. Now it’s not like I hadn’t been working on music projects at all. I developed an online music education platform called The Music Class, which is a series of music fundamentals courses. But projects like The Music Class, marketing videos and assets, and voiceover work took the majority of my creative energies. Don’t get me wrong, I love creating regardless, but at my core I consider myself a musician first. I wanted to find a way back to writing, recording, and performing original material. It just so happens that Barbara is a musician too, so I decided we should work on a music project together.

It took a bit less convincing than I had expected. In general, Barbara is game for most things, but our music styles are pretty different, and I’d wondered if she would be able to move past that. Also, we operate very differently. I tend to see things as a series of goals and objectives, and then map out the process of achieving them. I do not take deviation from the plan well. This might not seem like normal behavior for a creative mind, but I’ve worked hard, for years, to develop an organizational method. As a child, I wasn’t organized at all, and I realized that for me to be effective I would need to learn to be. Barbara is way more laissez-faire. She prefers to let things happen organically, and I can’t trust that things will. So I’m a pusher. But when Barbara agreed, I sort of vowed that I would do my best to chill the hell out.

We quickly came up with the name North To Port

which is an homage to Barbara’s move from South America north to be with me; as well as an homage to Portsmouth, the jewel city that defines our region. The name also has a seafarin’ motif that speaks to my love of the ocean. As we chatted about playing together, the conversation naturally migrated towards project goals. We talked about “style” and approach to writing too, but it was talking through our goals that my epiphany happened.

Barbara and I both enjoy playing live shows, but I think playing live is an end for her; she could probably enjoy it regardless of the circumstances. And she’s a natural actually. I have a vivid memory of Barbara playing a show with me in NH in support of an album I released five years ago. There were a few bands playing that night too. But when Barbara played and sang, I was taken aback by her control.

I’ve told her this before, but Barbara’s control is what most impresses me

For one thing, she has great technical control over her voice, but she also has emotive control. Her ability to covey is awesome to witness. She is able to show vulnerability and confidence simultaneously. And she does it with class. She’s a classy lady. It’s the combination of these two types of control that’s stunning, which is probably why she can be happy doing it even if the situation isn’t optimal. I’m not like that. I’ve played a lot shows throughout my life, and early on any show was a rush. But now, unless there’s an audience there who legitimately wants to see me perform, I prefer not to. I’m just past the point of playing a bar at midnight for no one.

As we discussed our goals, this very thing came up. We both wanted to play live, but for me, there had to be an audience that wanted to see us play. So then the question is, how do we find that audience?

Since forever I have been trying to crack the code of making a living as a musician. I suppose in my earlier life, the best thing I could have done is just live the musician lifestyle. Play everywhere, get by financially, make as many contacts as possible, connect with and build a fanbase; the usual. But I didn’t like the starving-artist lifestyle. Perhaps I’m too prissy. I also stubbornly believed that if my art were good enough, people would want it without pressing for it. I now know a bit more about marketing, and so I realize success is not just about the product, delivery is as important.

Technology has made wonderful things available to musicians, including the ability to record our own music ourselves for a fraction of what it used to cost during the studio heyday of a few decades ago. And it also allows us to connect in meaningful ways with like-minded individuals all over the planet. So the market for my “style” of music is more accessible, because my music can travel further than it ever could before the internet. Now that it’s possible to reach a global audience, a good product is essential, but you also need to have a compelling story that differentiates you from your peers, and attracts like-minded individuals.

While Barbara and I talked, a few things became clear to me.

The question was, how?

And then it came to me. We could write that story.

I’ve been a podcast consumer for about a year now. Sometimes it takes me awhile to adopt new media, I think because I need to fully understand it before I invest much effort. I had listened to some in the past, like Radiolab for example, but it wasn’t until recently that I became pretty invested in a dozen or so podcasts. They range in topics from lifestyle to suspenseful fiction. I would say I tend to skew nonfiction, and I think that’s because it mimics my reading habits. I even host a local bi-weekly podcast.

It’s clear my new found interest in podcasts directly influenced the concept of North To Port, so here’s what we came up with:

In order to attract our audience we decided to write an episodic fiction podcast about a touring band called North To Port. Each podcast episode would be a radio interview in the location of their tour stop. Through the episodes, the audience would learn about the band (their history, influences, exploits, and shenanigans), and what it was like for them on the road together. Each episode would end with a song written to encapsulate the theme of that episode.

By presenting the material in this way, we hoped it would be compelling for our audience. That they would find it fun and novel. That they would get to know the characters and enjoy the adventures that come from being on tour (if that tour happened in an extremely eventful world). And that they would be able to listen to North To Port music with a deeper understanding of why it was created, and what it means. I always like to know what a composer was thinking and feeling when they wrote a piece of music I enjoy, and I can imagine a lot of people like that too.

North To Port the band, the podcast, and the music is a concept album, and each song of the album is played out in a corresponding podcast episode. We hope this adds more reality to the story, that it becomes three-dimensional. We hope to find a receptive audience who enjoys listening to it as much as we’ve enjoyed creating it.

I find that projects tend to change from their original premise, and the plan to implement them always changes. So it was for North To Port, and as much as it’s still a collaboration between me and Barbara, I ended doing the bulk of the writing. But Barbara allowed me great freedom to take the writing where I wanted it to go, and to me that’s resulted in a love song for my lovely wife.

As much as the writing has been me, the project is about us, traveling around this fantasy world, playing shows and having adventures. The neat part is, we’ve had a ton of adventures already, and I’ve been able to incorporate them into the story. Sometimes explicitly, and sometimes fantastically. And by creating this art project out of them, it helps me imagine what our next adventures might be.